Pirbright in Surrey (England) is a town located in United Kingdom about 27 mi (or 43 km) south-west of London, the country's capital place.

Time in Pirbright is now 03:16 PM (Sunday). The local timezone is named Europe / London with an UTC offset of one hour. We know of 11 airports nearby Pirbright, of which 5 are larger airports. The closest airport in United Kingdom is Fairoaks Airport in a distance of 5 mi (or 9 km), North-East. Besides the airports, there are other travel options available (check left side).

There are several Unesco world heritage sites nearby. The closest heritage site in United Kingdom is Stonehenge, Avebury and Associated Sites in a distance of 22 mi (or 35 km), East. Also, if you like the game of golf, there are several options within driving distance. We collected 3 points of interest near this location. Need some hints on where to stay? We compiled a list of available hotels close to the map centre further down the page.

Being here already, you might want to pay a visit to some of the following locations: Seale, Sunningdale, Godalming, Shalford and Sandhurst. To further explore this place, just scroll down and browse the available info. 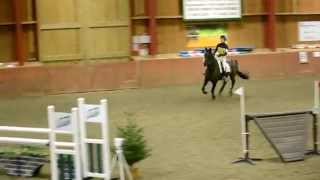 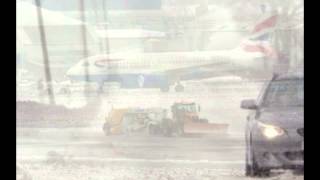 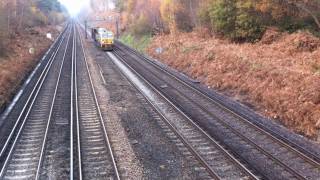 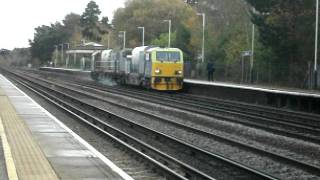 A Network Rail MPV Passes through brookwood. The MPV was sraying in this shot. 30 mins later another MPV passed the opposite direction. 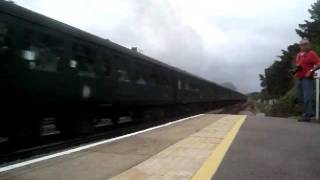 34067 Tangmere and 70000 Britania with the atlantic coast express at brookwood station. 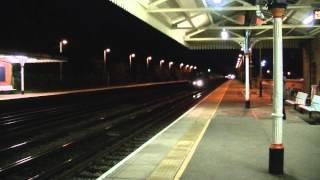 35028 Clan Line storms though the fast line at Brookwood Station just after it whent dark. It is working 1Z98 the return leg of The Royal Wessex . Clan Line was also pulling a DBS (EWS) class... 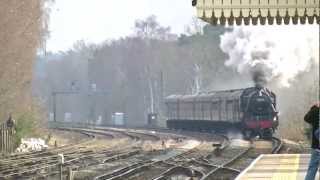 LMS 5MT 'Black Five' passes Brookwood station on the Bath And Bristol railtour. Please watch my playlist of all the steam videos I have done... http://www.youtube.com/playlist?list=PL1BE35FE448FF4. 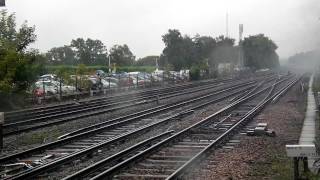 A very rainy August morning in Brookwood, SR BoB Class 4-6-2 no 34067 Tangmere, thunders through the station in a cloud of smoke, smell and noise on the down slow. 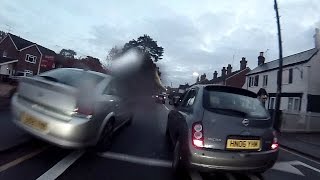 Nice of Micra HN06 YHM to "look out for each other" during road safety week. Close pass while traffic is also on coming and parked car. Not much of a gap left. 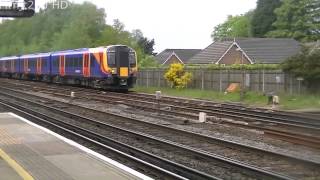 Spoting with Sam and Aaron at Brookwood Station on the 19/5/12. P.S sorry that I havent uploded any vidds for a while.

The Basingstoke Canal is a British canal, completed in 1794, built to connect Basingstoke with the River Thames at Weybridge via the Wey Navigation. From Basingstoke, the canal passes through or near Greywell, North Warnborough, Odiham, Dogmersfield, Fleet, Farnborough Airfield, Aldershot, Mytchett, Brookwood, Knaphill and Woking. Its eastern end is at Byfleet, where it connects to the Wey Navigation. This, in turn, leads to the River Thames at Weybridge.

Brookwood Cemetery, also known as the London Necropolis, is a burial ground in Brookwood, Surrey, England. It is the largest cemetery in the United Kingdom and one of the largest in western Europe.

St. Edward the Martyr Orthodox Church is an Orthodox Church in Brookwood, Surrey, England. The Saint Edward Brotherhood was established at Brookwood in 1982 to prepare and care for the Church in which the relics of Saint Edward the Martyr were to be enshrined. A small monastic community chants the services of the Church daily at the Shrine, and their numbers are augmented on Sundays and feast days by a number of Orthodox who form a mission parish. St.

Edith Jessie Thompson (25 December 1893 – 9 January 1923) and Frederick Edward Francis Bywaters (27 June 1902 – 9 January 1923) were a British couple executed for the murder of Thompson’s husband Percy. Their case became a cause célèbre.

These are some bigger and more relevant cities in the wider vivinity of Pirbright.

I DO LIKE MONDAYS! Free Networking Event In Farnborough
Starting at: 08:00 pm (20:00).
More Information: eventful.com.