Egham in Surrey (England) with it's 29,663 habitants is a town located in United Kingdom about 19 mi (or 31 km) west of London, the country's capital town.

Time in Egham is now 04:53 AM (Monday). The local timezone is named Europe / London with an UTC offset of one hour. We know of 11 airports closer to Egham, of which 5 are larger airports. The closest airport in United Kingdom is London Heathrow Airport in a distance of 5 mi (or 8 km), North-East. Besides the airports, there are other travel options available (check left side).

There are several Unesco world heritage sites nearby. The closest heritage site in United Kingdom is Stonehenge, Avebury and Associated Sites in a distance of 24 mi (or 38 km), South-East. Also, if you like the game of golf, there are some options within driving distance. We saw 3 points of interest near this location. In need of a room? We compiled a list of available hotels close to the map centre further down the page.

Since you are here already, you might want to pay a visit to some of the following locations: Horton, Old Windsor, Datchet, Sunningdale and Slough. To further explore this place, just scroll down and browse the available info. 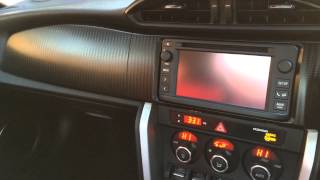 This Toyota GT86 boxer has been sat under the covers for 2 long weeks as I had gone on holiday. I was concerned about parasitic load and the cold winter temperatures draining the batter's charge... 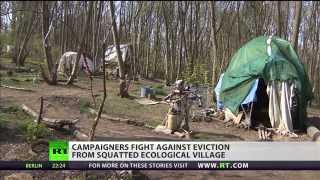 Eco-Village Under Threat From Magna Carta?

A count court this morning acted to delay the clearing of Runnymede Eco-Village in Surrey. The so-called 'residents' say they're being evicted to make way for celebrations marking the signing... 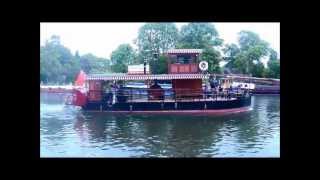 Originally built for "Tarzan - the legend of Greystoke", the Lucy Fisher is a replica of an African Paddle steamer now plying the River Thames at Runnynede famous for where the Magna Carta... 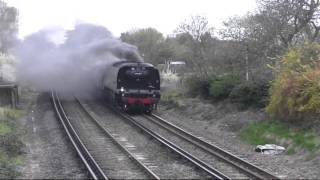 Tangmere 34067 between Staines and Egham on 6.4.09 Great Britain II Railtour

Battle of Britain Class Locomotive Tangmere 34067 on Great Britain II Railtour between Staines and Egham 6.4.09 - apologies for the wind and 'other' background noises. 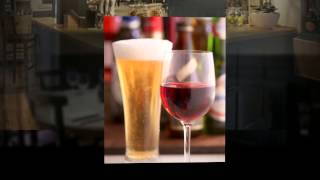 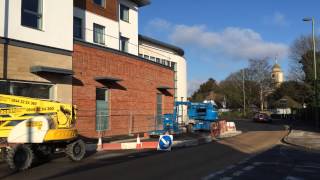 Steam cleaning Waitrose Egham in preparation for the opening

On June 14th, East Midlands Trains rebranded one of their HST sets into South West trains colours for a staff excursion from Sheffield to Swanage. Seen here is train 1Z43 passing Egham at 09:35,... 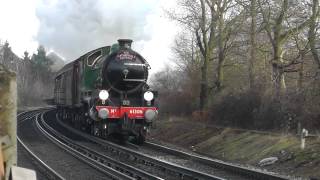 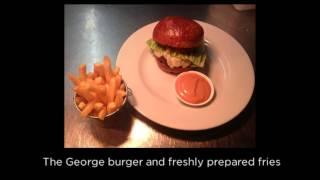 Strode's College is a sixth form college located in Egham, Surrey. Its history began in 1704 when Henry Strode bequeathed £6,000 to set up a free school in his native parish of Egham. In the twentieth century Strode's became a boys' grammar school before being designated a sixth form college in 1975. At present it has a roll of 1540 students aged 16 to 18. Results exceed national averages and the college recorded 100% passes in 30 A level subjects in 2011.

The Air Forces Memorial, or Runnymede Memorial,in Englefield Green, near Egham, Surrey, England is a memorial dedicated to some 20,456 men and women from the British Empire who were lost in operations from World War II. All of those recorded have no known grave anywhere in the world, and many were lost without trace. The name of each of these airmen and airwomen is engraved into the stone walls of the memorial, according to country and squadron.

Egham railway station serves the town of Egham in Surrey, England. The station is owned by Network Rail and managed by South West Trains, who provide the train services. The station is on the line from Waterloo to Reading between Virginia Water and Staines. The station is also served by trains to Weybridge. The station signs read 'Egham, for Royal Holloway, University of London'. A large number of students from this college use the station for travel to and from Egham.

The Island, Hythe End is an island in the River Thames in England on the reach above Bell Weir Lock, near Hythe End and Wraysbury, Berkshire. It is connected to the Berkshire side of the river and has a number of riverside houses on it. The Island lies alongside the course of Egham Regatta.

Langham Pond is a Site of Special Scientific Interest in Surrey, England.

Insanity Radio is the student radio station of Royal Holloway, University of London and a member of the UK Student Radio Association. Established in 1998, the station broadcasts throughout the year on a community radio license, with presenters in the studio presenting a varied schedule from 7 am until 1 am every day during term time, and from 2 pm until 6 pm each day during the University's recess periods.

The Founder's Building was the original building of Royal Holloway College, University of London (RHUL) in Egham, Surrey, England. It is an example of Gothic Revival architecture in the United Kingdom. Today it is the dominant building on the campus.

St. John's Church, Egham or Egham Parish Church. or St. John the Baptist, Egham (or simply St. John's Church) is an evangelical Anglican church located in the centre of Egham, Surrey, in the Diocese of Guildford. There are approximately 350 members on the Electoral Roll and a usual Sunday attendance in the region of 450. The incumbent (Vicar) is the Revd Jeff Wattley.

Runnymede Hotel the runnymede-on-thames is a four star family run hotel and spa located in Egham on the banks of the River Thames in South-East England. Runnymede features three restaurants and a health spa and is located just 15 minutes drive from Heathrow Airport. The hotel was used for the reception of the Great Britain Olympic Team on their return from the 2008 Summer Olympics.

Ankerwycke Priory was a priory of Benedictine nuns in Buckinghamshire, England. It was established around 1160 and dissolved in 1536.

Flight Lieutenant Ernest Melville Charles Guest DFC (1920 – 4 October 1943) was a Rhodesian-born Royal Air Force pilot of the Second World War. He was awarded the Distinguished Flying Cross in 1942 having flown more than 1,000 operational hours. Posted to South Africa as a flight navigation instructor, he was unhappy and got himself transferred back to England on operational duties. He soon went missing in October 1943 after taking on six Ju 88s while on an anti-submarine sortie.

These are some bigger and more relevant cities in the wider vivinity of Egham.

This place is known by different names. Here the ones we know:
Egham, Эгхем