The district Al Madīnah al Jāmi‘īyah of in Damascus Governorate is a subburb in Syria a little west of Damascus, the country's capital town.

While being here, you might want to pay a visit to some of the following locations: Damascus, Darayya, Qadsayya, Al Hajar al Aswad and Babila. To further explore this place, just scroll down and browse the available info. 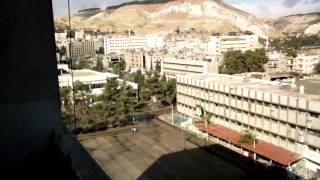 damascus from my room _المدينة الجامعية 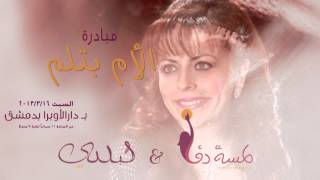 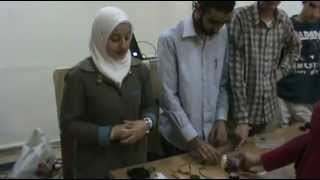 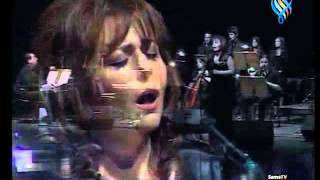 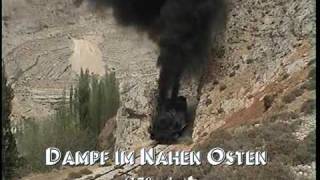 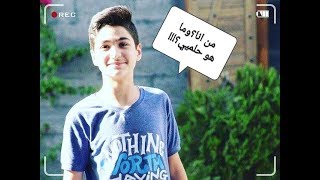 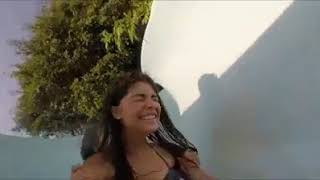 a group of twenty-somethings go around Damascus with a camera, and capture the normal life we're living, despite everything the world sees on the internet and ... 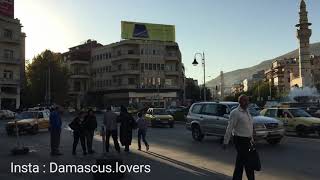 The University of Damascus is the largest and oldest university in Syria, located in the capital Damascus and has campuses in other Syrian cities. It was founded in 1923 through the merger of the School of Medicine (established 1903) and the Institute of Law (established 1913), also making it the oldest university in modern-day Syria. Until 1958 it was named the Syrian University, but the name changed after the founding of the University of Aleppo.

Located at 33.5114, 36.2914 (Lat. / Lng.), about 3.301 miles away.
Wikipedia Article
Educational institutions established in 1923, Damascus University, Buildings and structures in Damascus, 1923 establishments in Syria, Libraries in Syria

The Ministry of Defense is a government ministry office of the Syrian Arab Republic, responsible for defense affairs in Syria.

Mezzeh prison is a now-defunct Syrian prison overlooking the capital, Damascus. Mezzeh (also transcribed as al-Mazzah, el-Mezze etc. ) is the name of a neighborhood in western Damascus. Both military and political prisoners were held at Mezzeh prison. The prison was an infamous embodiment of Syrian government repression. Widespread human rights abuses and torture has been reported from the Mezzeh prison throughout its history but most notably during the rule of Hafez al-Assad (1970–2000).

Faculty of Medicine of Damascus University

The Faculty of Medicine of Damascus University, founded in 1903, was the first university college established in Syria. The school moved to Beirut temporarily during World War I. At one point later it was called the Arab Medical Institute.

Faculty of Informatics of Damascus University

The Faculty of Informatics of Damascus University is the first faculty for computer science in Syria. It was established in 1999 as a part of Damascus University, and it awards bachelor's degrees after ten semesters of study, and master's degrees after an extra four semesters. Like most other faculties in Syrian public universities, study plans are fixed. Students can choose among three disciplines beginning from their 7th Semester, viz.

Al-Jalaa Stadium is a stadium located in Damascus, Syria. It is currently used mostly for football matches. It serves as a home ground of Al-Shorta SC Damascus. The stadium holds 12,000 spectators.

Higher Institute of Dramatic Arts was founded in Damascus, Syria in 1977. The institute heralded a new phase in the development of Syrian theatre and drama which begun with the preparation of the next generation of actors on an academic basis. The Institute includes three departments: Acting, Theatrical Critique and Dramatic Arts.

Located at 33.5122, 36.2789 (Lat. / Lng.), about 3.300 miles away.
Wikipedia Article
Universities in Syria, Education in Damascus, Buildings and structures in Damascus, Educational institutions established in 1977, 1977 establishments in Syria, Higher Institute for Dramatic Arts

Al-Assad Library is the national library of Syria. It was established in Damascus in 1984 'to gather all books and daily issues in addition to all kinds of literature connected with our "ancestral cultural legacy", then to sort out these materials to serve researchers and scholars and benefit them. ' The building, overlooking the Umayyad Square, covers an area of 22000 m², spread over 9 floors and holds over 40000 titles. It is the legal deposit and copyright for Syria.

Located at 33.5147, 36.2775 (Lat. / Lng.), about 3.300 miles away.
Wikipedia Article
Library buildings completed in 1984, Libraries in Syria, National libraries, Education in Damascus, Buildings and structures in Damascus, 1984 establishments in Syria, Libraries established in 1984

Tomb of the Unknown Soldier (Damascus)

The Tomb of the Unknown Soldier is a war memorial, dedicated to the Syrian soldiers killed during battle. It is visited every year by the President of Syria on Martyrs' Day (May 6). The monument was designed by Prof. Dr. (Architecture) Abdo Kass-Hout and Prof. , Mahmoud Hammad who won a competition organized by the Syrian Ministry of Defense. Erected in 1994, the monument features a dome, symbolizing the universe, and an arch, symbolizing victory.

The Cabinet of Syria is the chief executive body of the Syrian Arab Republic. According to the Constitution of Syria: Section 2 The Council of Ministers Article 115 [Cabinet Cabinet] (1) The cabinet is the state's highest executive and administrative body. It consists of the President of the Council of Ministers, his deputies, and the ministers. It supervises the execution of the laws and regulations and the work of the state machinery and institutions.

Four Seasons Hotel Damascus is a five-star hotel and part of the Toronto-based Four Seasons luxury hotels and resorts. It is located in the central district of neighborhood of Damascus, Syria. The hotel, financed by the Saudi prince Al-Waleed bin Talal, was opened in 2005 having been completed on time by local contractor Fouad Takla Company. It is located in Shukri Al Quatli Street.

Damascus Community School is an unlicensed American school founded by the former US secretary of state John Foster Dulles in 1957 in Damascus, Syria. The school was built to promote American ideals and culture and to help steer Syria away from becoming a Soviet satellite.

Located at 33.5172, 36.2822 (Lat. / Lng.), about 3.301 miles away.
Wikipedia Article, Homepage
Education in Damascus, International schools in Syria, Buildings and structures in Damascus, 1957 establishments in Syria

Mezzeh is a municipality and a relatively new neighborhood of Damascus, Syria. It lies to the southwest of central Damascus, along the Mezzeh highway. It started gaining importance when the French constructed the Mezzeh airbase there, which was the main airport in Damascus until Damascus International Airport was opened. It also held the notorious Mezzeh prison until 2000. The current presidential palace in on the top of Mount Mezzeh and overlooks all of Damascus.

The Damascus Opera House (officially Dar al-Assad for Culture and Arts) is the national opera house of Syria. Inaugurated on 7 May 2004, it is located in central Damascus, on the Umayyad Square.

Umayyad Square is a large and important square in Damascus, Syria. It connects the city center with several important highways and areas. The name refers to the Umayyad Caliphate when Damascus was the capital. On 20 June 2011 a massive pro-President al-Assad rally was held in the square as well as in Homs, Aleppo, Sweida, Latakia, Deraa, Hasaka, Tartous as well other locations during the Syrian civil war.

The Military Intelligence Directorate is the military intelligence service of Syria. Although its roots go back to the French mandate period (1923–1943), its current organization was established in 1969. Its predecessor organisation was called the Deuxième Bureau. It is headquartered at the Defense Ministry headquarters in Damascus. The military intelligence service, or the Mukhabarat in Arabic, is very influential in Syrian politics and is controlled by the President.

Abu Rummaneh is an upscale neighborhood west of Damascus, Syria. The quarter is centered around the palm-tree-lined Abu Rummaneh boulevard, known officially as al-Jalaa Boulevard, named for the evacuation of French mandate troops from Syria. The neighborhood serves as Damascus' diplomatic quarter, also housing the Arab Cultural Center and the French Institute for Arab Studies (IFEAD).

Al Assad University Hospital in Damascus is one of the largest teaching hospitals in Syria. It was founded in 1988 and is run by the Ministry of Higher Education. The hospital is affiliated with Damascus University.

Kafr Sousa كفر سوسة is a municipality and a neighbourhood of Damascus, Syria.

The 18 July 2012 Damascus bombing refers to the bombing of the National Security headquarters in Rawda Square, Damascus, killing and injuring a number of top military and security officials of Bashar al-Assad's government. Among the dead were the Syrian Defense Minister and Deputy Defense Minister, The incident occurred during the Syrian civil war, and is considered to be one of the most notorious events to affect the conflict.

Al-Shami Hospital is a central hospital in Al-Malky street, Damascus, Syria. It is used by Syria's political and military elite.

Al-Rawda Square is a square in north-west Damascus. The square is the location of the National Security Building, where the Defence Minister as well as President Bashar al-Assad’s brother-in-law were assassinated On July 18, 2012 during the Syrian civil war.

Presidential Palace is the residence for the President of Syria, located in Damascus. It is located in the West of the city, on Mount Mezzeh North of Mezzeh neighborhood, next to Mount Qasioun and overlooks the city. The main building covers 31,500 square meters (340,000 square feet). The entire plateau of Mount Mezzeh is part of the palace premises and is surrounded by a security wall and guard watchtowers.

Teshreen Palace is the residence for the President of Syria, located in Damascus. It is located in the Ar Rabwah neighborhood, South of Mount Qasioun. The building covers 10,000 square meters (108,000 square feet). During the Syrian civil war, there were reports that rebels fired mortars at the palace. The palace was used as the primary residence of the Assad family, until the construction of Presidential Palace on Mount Mazzeh was finished in the early 90's.

This place is known by different names. Here the ones we know:
Al Madīnah al Jāmi‘īyah, المدينة الجامعية