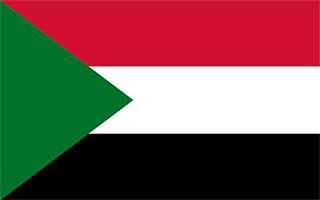 Safety Score: 4,3 of 5.0 based on data from 9 authorites. Meaning please reconsider your need to travel to Sudan.

Sudan with its capital Khartoum is located in Africa (north-eastern Africa, bordering the Red Sea). It covers some 1,861,481 square kilometers (slightly less than one-fifth the size of the US) with a population of 37,345,900. Arabic and English are the languages spoken by people in Sudan. Central African Republic, Chad, Egypt, Eritrea, Ethiopia, Libya and South Sudan are bordering countries.

Travel in Sudan outside Khartoum, Omdurman and the Northern State is considered dangerous. Two borderline civil wars continue to see violence, in Southern Sudan and particularly in Darfur, while extremist groups target foreign visitors for attacks and kidnapping, particularly in the Upper Nile regions and near the Ethiopian border.

The topography is generally flat, featureless plain with desert dominates the north. The average density of population is about 20 per km². The climate in Sudan can be described as hot and dryarid desert, rainy season varying by region (April to November). Potential natural disasters are dust storms and periodic persistent droughts.

To reach someone Sudan dial +249 prior to a number. The local cellular networks are operated on 900 MHz, 1800 MHz, 3G, 4G. Websites typically end with the top level domain ".sd". If you want to bring electric appliances (e.g. battery chaarger), keep in min the local 230 V - 50 Hz (plugs: C, D). The sign for the locally used currency Dinar is SDD.

Three equal horizontal bands of red (top), white, and black with a green isosceles triangle based on the hoist side; colors and design based on the Arab Revolt flag of World War I, but the meanings of the colors are expressed as follows: red signifies the struggle for freedom, white is the color of peace, light, and love, black represents the people of Sudan (in Arabic 'Sudan' means black), green is the color of Islam, agriculture, and prosperity.

Military regimes favoring Islamic-oriented governments have dominated national politics since independence from Anglo-Egyptian co-rule in 1956. Sudan was embroiled in two prolonged civil wars during most of the remainder of the 20th century. These conflicts were rooted in northern economic, political, and social domination of largely non-Muslim, non-Arab southern Sudanese. The first civil war ended in 1972 but another broke out in 1983. Peace talks gained momentum in 2002-04 with the signing of several accords. The final North/South Comprehensive Peace Agreement (CPA), signed in January 2005, granted the southern rebels autonomy for six years followed by a referendum on independence for Southern Sudan. The referendum was held in January 2011 and indicated overwhelming support for independence. South Sudan became independent on 9 July 2011. Sudan and South Sudan have yet to fully implement security and economic agreements signed in September 2012 relating to the normalization of relations between the two countries. The final disposition of the contested Abyei region has also to be decided. Following South Sudan's independence, conflict broke out between the government and the Sudan People's Liberation Movement-North in Southern Kordofan and Blue Nile states (together known as the Two Areas), and has resulted in 1.1 million internally displaced persons or severely affected persons needing humanitarian assistance. A separate conflict broke out in the western region of Darfur in 2003, displacing nearly 2 million people and causing thousands of deaths. Fighting in both the Two Areas and Darfur between government forces and opposition has largely subsided, however the civilian populations are affected by low-level violence including inter-tribal conflict and banditry, largely a result of weak rule of law. The UN and the African Union have jointly commanded a Darfur peacekeeping operation (UNAMID) since 2007. Peacekeeping troops have struggled to address insecurity in Darfur and have increasingly become targets for attacks by armed groups. Sudan also has faced refugee influxes from neighboring countries, primarily Ethiopia, Eritrea, Chad, Central African Republic, and South Sudan. Armed conflict, poor transport infrastructure, and denial of access by both the government and armed opposition have impeded the provision of humanitarian assistance to affected populations.