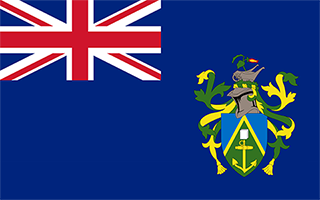 Pitcairn with its capital is located in Oceania (Oceania, islands in the South Pacific Ocean). It covers some 48 square kilometers (about three-tenths the size of Washington, DC) with 54 citizens. English is the language commonly spoken used in Pitcairn. This country shares no land borders with another country.

Pitcairn are a loosely grouped handful of tiny islands in the remote South Pacific, farther from any continent than any other inhabited island. The climate is humid and tropical (the Tropic of Capricorn lies a short distance to the north), with average temperatures ranging from 60°F (16°C) on winter nights to 85°F (30°C) on summer days. Rainfall is moderate with no strong seasonal pattern, just a bit wetter in the winter. The new museum in Adamstown contains artifacts from the Bounty (including Fletcher Christian's Bible), stamps, issues of National Geographic featuring the islands, and other items of local interest. One of the ship's four cannons is planned to be displayed here.

The landscape is rugged volcanic formation and rocky coastline with cliffs. The average density of population is about 1 per km². The climate in Pitcairn can be described as tropicalhot and humid, modified by southeast trade winds, rainy season (November to March). Potential threats by nature are landslides occasional tropical cyclones (especially November to March), but generally only heavy tropical storms

To reach someone Pitcairn dial prior to a number. The local cellular networks are operated on 900 MHz. Websites typically end with the top level domain ".pn". If you want to bring electric appliances (e.g. battery chaarger), keep in min the local 230 V - 50 Hz (plugs: I). The sign for the locally used currency Dollar is NZD.

Blue with the flag of the UK in the upper hoist-side quadrant and the Pitcairn Islander coat of arms centered on the outer half of the flag; the green, yellow, and blue of the shield represents the island rising from the ocean; the green field features a yellow anchor surmounted by a bible (both the anchor and the bible were items found on the HMS Bounty); sitting on the crest is a Pitcairn Island wheelbarrow from which springs a slip of miro (a local plant).

Pitcairn Island was discovered in 1767 by the British and settled in 1790 by the Bounty mutineers and their Tahitian companions. Pitcairn was the first Pacific island to become a British colony (in 1838) and today remains the last vestige of that empire in the South Pacific. Outmigration, primarily to New Zealand, has thinned the population from a peak of 233 in 1937 to less than 50 today.