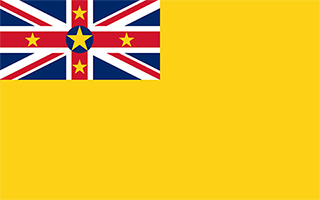 Niue with its capital Alofi is located in Oceania (Oceania, island in the South Pacific Ocean). It covers some 261 square kilometers (1.5 times the size of Washington, DC) with 1,618 citizens. English is the language commonly spoken used by the people in Niue. This country shares no land borders with another country.

Niue is an island in Oceania. It is located approximately halfway between Tonga and the Cook Islands. The word Niue is not used in the local language to refer to this island, meaning in fact Look! There's a coconut. Captain Cook called it Savage Island, thinking (incorrectly) that the natives who came to greet them were painted in blood. From the sea approaches Niue is flat with its cliff faces resembling a large ‘Swiss cheese’ composed of coral limestone rock peppered with caves, hidden caverns and chasms, buried grottoes and other subterranean natural fissures that are yet to be discovered and developed into tourist attractions. Niue is dotted with many caves and limestone arches. There are a lot of 'sea tracks' that lead from the road to the coast. Wandering down one and seeing what you find at the end is a lot of fun.

The landscape is steep limestone cliffs along coast, central plateau. The average density of population is about 6 per km². The climate in Niue can be described as tropical with modified by southeast trade winds. Potential threats by nature are tropical cyclones.

To reach someone Niue dial +683 prior to a number. The local cellular networks are operated on 900 MHz, 4G. Websites typically end with the top level domain ".nu". If you want to bring electric appliances (e.g. battery chaarger), keep in min the local 230 V - 50 Hz (plugs: I). The sign for the locally used currency Dollar is NZD.

Yellow with the flag of the UK in the upper hoist-side quadrant; the flag of the UK bears five yellow five-pointed stars - a large star on a blue disk in the center and a smaller star on each arm of the bold red cross; the larger star stands for Niue, the smaller stars recall the Southern Cross constellation on the New Zealand flag and symbolize links with that country; yellow represents the bright sunshine of Niue and the warmth and friendship between Niue and New Zealand.

Niue's remoteness, as well as cultural and linguistic differences between its Polynesian inhabitants and those of the adjacent Cook Islands, has caused it to be separately administered by New Zealand. The population of the island continues to drop (from a peak of 5,200 in 1966 to 1,626 in 2015) with substantial emigration to New Zealand 2,400 km to the southwest.