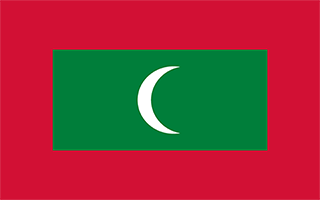 Safety Score: 3,4 of 5.0 based on data from 9 authorites. Meaning please reconsider your need to travel to Maldives.

Maldives with its capital Male is located in Asia (Southern Asia, group of atolls in the Indian Ocean). It covers some 299 square kilometers (about 1.7 times the size of Washington, DC) with a population of 392,709. Dhivehi and English are the languages spoken by people in Maldives. Thiscountry has no land-based border with any other country.

Maldives are an archipelago of 1,192 coral islands grouped into 26 coral atolls (200 inhabited islands, plus 80 islands with tourist resorts) in the Indian Ocean. Tourism, Maldives largest industry, accounts for 20% of GDP and more than 60% of the Maldives' foreign exchange receipts. The Maldives are tropical, with plenty of sunshine and temperatures around 30°C throughout the year. However, rainfall increases considerably during the April-October southwest monsoon, particularly from June to August. Aside from making the water bungalow rock on your honeymoon, the primary activity on the Maldives is scuba diving. The atolls are all coral reefs hundreds of kilometers away from any major landmass, meaning that water clarity is excellent and underwater life is abundant.

The topography is flat, with white sandy beaches. The average density of population is about 1,318 per km². The climate in Maldives can be described as tropicalhot, humid, dry, northeast monsoon (November to March), rainy, southwest monsoon (June to August). Potential natural disasters are low elevation of islands makes them sensitive to sea level rise tsunamis

To reach someone Maldives dial +960 prior to a number. The local cellular networks are operated on 900 MHz, 3G, 4G. Websites typically end with the top level domain ".mv". If you want to bring electric appliances (e.g. battery chaarger), keep in min the local 230 V - 50 Hz (plugs: C, D, G, J, K, L). The sign for the locally used currency Rufiyaa is MVR.

A sultanate since the 12th century, the Maldives became a British protectorate in 1887. It became a republic in 1968, three years after independence. President Maumoon Abdul GAYOOM dominated the islands' political scene for 30 years, elected to six successive terms by single-party referendums. Following political demonstrations in the capital Male in August 2003, GAYOOM and his government pledged to embark upon a process of liberalization and democratic reforms, including a more representative political system and expanded political freedoms. Political parties were legalized in 2005. In June 2008, a constituent assembly - termed the "Special Majlis" - finalized a new constitution ratified by GAYOOM in August 2008. The first-ever presidential elections under a multi-candidate, multi-party system were held in October 2008. GAYOOM was defeated in a runoff poll by Mohamed NASHEED, a political activist who had been jailed several years earlier by the GAYOOM regime. NASHEED faced a number of challenges including strengthening democracy and combating poverty and drug abuse. In early February 2012, after several weeks of street protests in response to his ordering the arrest of a top judge, NASHEED resigned the presidency and handed over power to Vice President Mohammed WAHEED Hassan Maniku. In mid-2012, a Commission of National Inquiry was established by the government to probe events leading up to NASHEED's resignation. Though the commission found no evidence of a coup, the report recommended strengthening the country's democratic institutions to avert similar events in the future, and to investigate alleged police misconduct during the crisis. NASHEED, WAHEED, and Abdulla YAMEEN ran in the 2013 elections with YAMEEN ultimately winning the presidency after three rounds of voting. Maldivian officials have played a prominent role in international climate change discussions (due to the islands' vulnerability to rising sea-level).