Current time in Foligno is now 02:57 PM (Sunday). The local timezone is named Europe / Rome with an UTC offset of 2 hours. We know of 11 airports near Foligno, of which 5 are larger airports. The closest airport in Italy is Perugia / San Egidio Airport in a distance of 14 mi (or 22 km), North-West. Besides the airports, there are other travel options available (check left side).

There are several Unesco world heritage sites nearby. The closest heritage site in Italy is Assisi, the Basilica of San Francesco and Other Franciscan Sites in a distance of 9 mi (or 14 km), North-West. If you need a hotel, we compiled a list of available hotels close to the map centre further down the page.

While being here, you might want to pay a visit to some of the following locations: Spello, Montefalco, Bevagna, Trevi and Valtopina. To further explore this place, just scroll down and browse the available info. 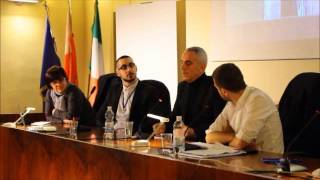 Foligno Airport is the airport of the Italian city of Foligno in Umbria region. It is used for general aviation, school, business jet aviation, charter aviation and cargo. It will be used as national base of Civil defense aviation. Radio assistance available at 119.55 MHz.

Located at 42.9328, 12.71 (Lat. / Lng.), about 2 miles away.
Wikipedia Article
Foligno, Airports in Italy, Transport in Umbria, Buildings and structures in Umbria

The Stadio comunale Enzo Blasone is a multi-use stadium in Foligno, Italy. It is currently used mostly for football matches and is the home stadium of Foligno Calcio. It holds 4.650. It was built in 1981 - 1982 because of the promotion of Foligno Calcio to Serie C2, the former fourth level of Italian football.

Located at 42.9533, 12.6917 (Lat. / Lng.), about 1 miles away.
Wikipedia Article, Homepage
Football venues in Italy, Buildings and structures in Foligno, Sports venues in Umbria

The Trinci Palace is a patrician residence in the center of Foligno, central Italy. It houses an archaeological museum, the city's picture gallery, a multimedia museum of Tournaments and Jousts and the Civic Museum.

Foligno Cathedral (Italian: Basilica Cattedrale di San Feliciano; Duomo di Foligno) is a Roman Catholic cathedral situated on the Piazza della Repubblica in the center of Foligno, Italy. The cathedral, built on the site of an earlier basilica, is dedicated to the patron saint of the city, the martyr Felician of Foligno (San Feliciano), who was buried here in 251 AD. It is the seat of the Bishop of Foligno.

Located at 42.9564, 12.7033 (Lat. / Lng.), about 0 miles away.
Wikipedia Article
Buildings and structures in Foligno, Cathedrals in Italy, 12th-century church buildings, Churches in Umbria

Foligno railway station (Italian: Stazione di Foligno) serves the town and comune of Foligno, in the region of Umbria, central Italy. It is also the most important railway junction in Umbria. Opened in 1866, it forms part of the Rome–Ancona railway, and is the southeastern terminus of the Foligno–Terontola railway, which links Florence with Rome. The station is currently managed by Rete Ferroviaria Italiana (RFI).

Vescia was an ancient Latin city of the Ausones, which was part of the so-called Auruncan Pentapolis and was destroyed by the Romans in 340 BC. It was a fortified center, located perhaps on the left shore of the Garigliano river, in the current comuni of Cellole and Sessa Aurunca, where remains of pre-Romans walls have been found. According to some sources, it was located on the Monte Massico, where there also ancient remains including a subterranean aqueduct and large mosaic pavements.

These are some bigger and more relevant cities in the wider vivinity of Foligno.

Mindfulness And Compassion Across The Lifespan
Starting at: 09:00 pm (21:00).
More Information: eventful.com.

This place is known by different names. Here the ones we know:
Foligno, フォリーニョ, Фолиньо