Firá in Nomós Kykládon (South Aegean) with it's 2,376 inhabitants is located in Greece about 143 mi (or 230 km) south-east of Athens, the country's capital.

Local time in Firá is now 01:13 AM (Wednesday). The local timezone is named Europe / Athens with an UTC offset of 3 hours. We know of 11 airports in the wider vicinity of Firá, of which 4 are larger airports. The closest airport in Greece is Santorini Airport in a distance of 3 mi (or 5 km), South-East. Besides the airports, there are other travel options available (check left side).

There are several Unesco world heritage sites nearby. The closest heritage site in Greece is Delos in a distance of 68 mi (or 110 km), North. If you need a place to sleep, we compiled a list of available hotels close to the map centre further down the page.

Depending on your travel schedule, you might want to pay a visit to some of the following locations: Anafi, Ios, Sikinos, Folegandros and Amorgos. To further explore this place, just scroll down and browse the available info. 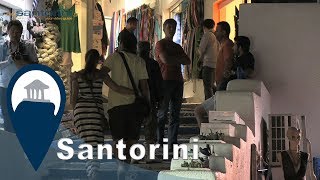 Walking in Fira, Santorini - http://www.myGreece.tv/en/Santorini/ Fira, the main community on Santorini, is fairly easy to get around on foot, as it's mostly concentrated just below the rim... 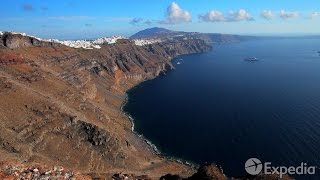 This video for Fira is one of our older productions, but we wanted to share it with you to get some feedback on how these older clips compare to the more recent travel guides we've shot.... 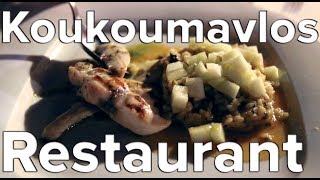 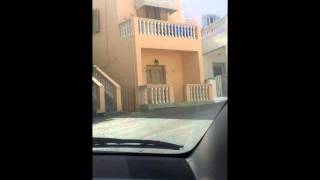 Driving through Fira and Firostefani

What it looks like to drive from Fira center to the edge of Firostefani in Santorini. A little boring, and not as sometimes alarming as it was to be sitting in the passenger seat of a tiny... 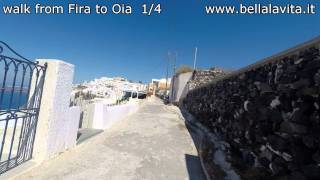 Santorini 2014 - walk Fira to Oia part 1. this part if from Fira to Imerovigli. about 50 minutes walking Percorso a piedi da Fira a Oia. questa parte mostra da Fira a Imerovigli. circa 50 minuti.... 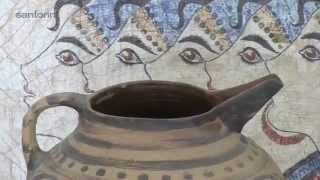 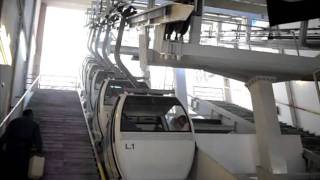 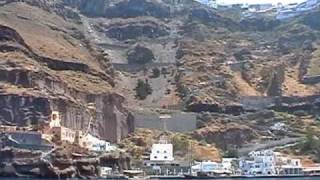 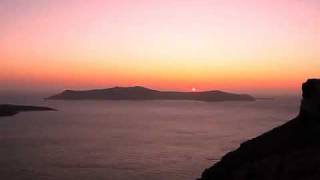 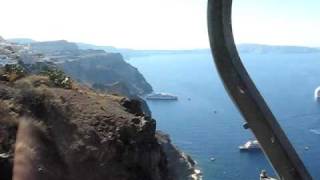 Firá is the modern capital of the Greek Aegean island, Santorini. A traditional settlement, "Firá" derives its name from an alternative pronunciation of "Thíra", the ancient name of the island itself. Fira is a city of white-washed houses built on the edge of the 400 m high caldera on the western edge of the semi-circular island of Thera.

The Minoan eruption of Thera, also referred to as the Thera eruption or Santorini eruption, was a major catastrophic volcanic eruption with a Volcanic Explosivity Index (VEI) of 6 or 7 and a Dense-rock equivalent (DRE) of 60 km, which is estimated to have occurred in the mid second millennium BCE. The eruption was one of the largest volcanic events on Earth in recorded history.

Nea Kameni is a small uninhabited Greek island of volcanic origin located in the Aegean Sea within the flooded Santorini caldera. Nea Kameni and the neighbouring small island Palea Kameni (the new and old burnt islands) have formed over the past two millennia by repeated eruptions of dacite lava and ash. Major eruptions over the past 300 years took place in 1707–1712, 1866–1870, 1925–1928, and 1939-1941. The last small eruption happened in 1950 and involved lava dome extrusion.

Located at 36.4, 25.4 (Lat. / Lng.), about 2 miles away.
Wikipedia Article
Santorini, New islands, Volcanoes of Greece, Volcanoes of the Aegean, Uninhabited islands of Greece

MS Sea Diamond was a cruise ship operated by Louis Hellenic Cruise Lines. She was built in 1984 by Valmet, Finland for Birka Line as MS Birka Princess. The ship sank on April 5, 2007, after running aground near the Greek island of Santorini the previous day, leaving two passengers missing and presumed dead.

The South Aegean Volcanic Arc is a chain of volcanic islands in the South Aegean Sea formed by plate tectonics as a consequence of the subduction of the African tectonic plate beneath the Eurasian plate. The southern Aegean is one of the most rapidly deforming regions of the Himalayan-Alpine mountain belt. The active portion of the South Aegean Arc comprises a number of dormant and historically active volcanoes, including Aegina, Methana, Milos, Santorini and Kolumbo, and Kos, Nisyros and Yali.

Imerovigli is a village on the island of Santorini, Greece, adjacent to the north of the island capital Fira. Imerovigli is mostly famous for its beautiful sunset, that it is called "balcony to the Aegean". Its houses are built amphitheatrically around the caldera and it is crossed by narrow, paved paths. Imerovigli has many lovely churches, all made in the Cycladic architectural style.

Pyrgos Kallistis or simply Pyrgos (Greek: Πύργος Καλλίστης, literally 'Tower') is a picturesque village on the Aegean island of Santorini, Greece, in the Cyclades archipelago with a population of approx. 732 according to the 2001 census. Pyrgos is part of the Municipality of Thira and is situated approximately 7km away from the island's capital Fira. It is built amphitheatrically on a hill that offers magnificent views of Santorini in almost all directions.

A cable car connecting the port with the town of Thera in Santorini island in Greece. It was constructed as a donation of the “Loula & Evangelos Nomikos Foundation”.

These are some bigger and more relevant cities in the wider vivinity of Firá.