Hohburkersdorf in Saxony is a town located in Germany about 109 mi (or 176 km) south of Berlin, the country's capital place.

Time in Hohburkersdorf is now 08:13 AM (Monday). The local timezone is named Europe / Berlin with an UTC offset of 2 hours. We know of 9 airports nearby Hohburkersdorf, of which 5 are larger airports. The closest airport in Germany is Dresden Airport in a distance of 16 mi (or 26 km), North-West. Besides the airports, there are other travel options available (check left side).

There are several Unesco world heritage sites nearby. The closest heritage site in Germany is Dresden Elbe Valley in a distance of 11 mi (or 18 km), West. We collected 2 points of interest near this location. Need some hints on where to stay? We compiled a list of available hotels close to the map centre further down the page.

Being here already, you might want to pay a visit to some of the following locations: Lohmen, Struppen, Rathmannsdorf, Grossharthau and Arnsdorf. To further explore this place, just scroll down and browse the available info. 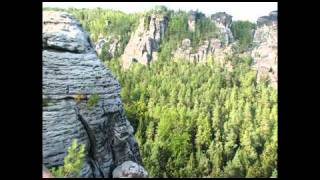 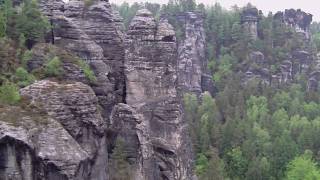 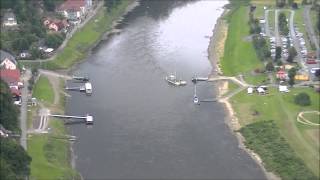 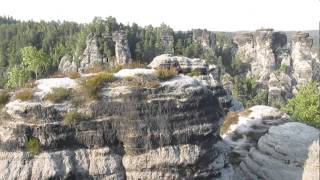 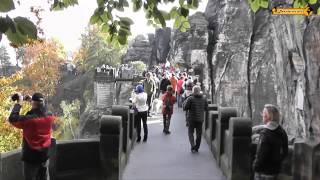 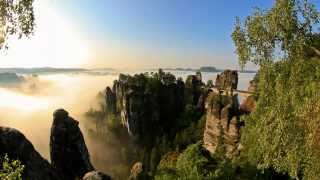 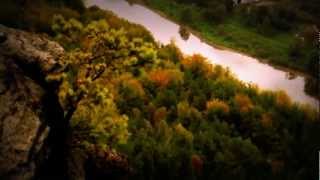 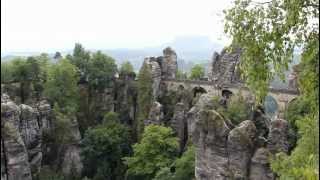 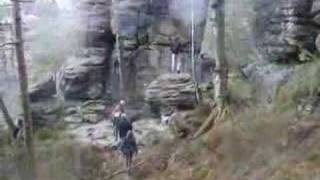 The Bastei is a rock formation towering 194 metres above the Elbe River in the Elbe Sandstone Mountains of Germany. Reaching a height of 305 metres above sea level, the jagged rocks of the Bastei were formed by water erosion over one million years ago. They are situated near Rathen, not far from Pirna southeast of the city of Dresden and are the major landmark of the Saxon Switzerland National Park.

The Lokomotive (German for "locomotive") is a striking climbing rock north of Kurort Rathen in Saxon Switzerland in Germany. The rock, which resembles a steam locomotive in appearance, is also known as Große Ruine, is about 30 metres high and is divided into two parts: known as Lokomotive-Dom ("Locomotive Dome") and Lokomotive-Esse ("Locomotive Chimney"). The ridge between the two is called the Kesselgrat ("Boiler Ridge"), the rock teeth next to the Esse as Pfeife ("Whistle").

The Mönch (also Mönchstein) is a rock pinnacle and popular climbing peak in Saxon Switzerland in Germany near the spa town of Rathen. The weather vane on the summit, in the shape of a tin monk, is visible from afar and acts as a navigation aid. In the Middle Ages the rock was used as a lookout for Neurathen Castle due to its prominent location.

The Schwedenturm ("Sweden Tower") in East Germany is a 35 m high rock formation made of sandstone in the hills of Saxon Switzerland near the spa town of Rathen and the famous Bastei rocks. From the car park for the Bastei, a path runs towards Schwedenlöcher. The Schwedenturm is situated on the right just before the entrance to a narrow ravine. Because it lies in the Saxon Switzerland Climbing Region the free-standing pinnacle may be used for climbing.

The Rathen Open Air Stage is a natural stage in Saxon Switzerland in East Germany. It is located in a hollow at the upper end of the Wehlgrund valley between the rocks of Kleine Gans and Großer Wehrturm below the famous Bastei rocks and Neurathen Castle. The entrance to the hollow branches off just above the valleys junction with the Amselgrund.

The Amsel Falls are a waterfall in Saxon Switzerland in East Germany, roughly a kilometre north of the famous Bastei crags. As the Grünbach stream passes through a particularly narrow, gorge-like section of the Amselgrund valley it plunges over the largest step in the river bed - roughly 10 m high - forming a wide spray of water that pours over the Amselloch, a collapsed cave. The roof of this 15 metre long cave was made of sandstone blocks that have collapsed.

The Amselsee (also Amselsee Rathen) is a small reservoir in the spa town of Rathen in Saxon Switzerland. It is located in the Free State of Saxony in Eastern Germany.

The Amselgrund ("Amsel Bottom") is the name given to the valley of the Grünbach stream in the heart of Saxon Switzerland in Eastern Germany. It runs from Niederrathen upstream to Rathewalde. The wild and romantic valley takes hikers through the Rathen rock basin with its bizarre rock formations. Its touristic high points are the lake of Amselsee and the Amsel Falls, that trickles over the grotto called the Amselloch. The valley bottom that is densely wooded is surrounded by a backdrop of rocks.

These are some bigger and more relevant cities in the wider vivinity of Hohburkersdorf.