Jägervorstadt in Brandenburg is a town in Germany about 17 mi (or 28 km) south-west of Berlin, the country's capital city.

Current time in Jägervorstadt is now 06:07 PM (Monday). The local timezone is named Europe / Berlin with an UTC offset of 2 hours. We know of 8 airports near Jägervorstadt, of which 4 are larger airports. The closest airport in Germany is Berlin-Tegel International Airport in a distance of 15 mi (or 24 km), North-East. Besides the airports, there are other travel options available (check left side).

There are several Unesco world heritage sites nearby. The closest heritage site in Germany is Palaces and Parks of Potsdam and Berlin in a distance of 1 mi (or 1 km), South-West. We discovered 2 points of interest in the vicinity of this place. Looking for a place to stay? we compiled a list of available hotels close to the map centre further down the page.

When in this area, you might want to pay a visit to some of the following locations: Potsdam, Michendorf, Stahnsdorf, Wustermark and Kleinmachnow. To further explore this place, just scroll down and browse the available info. 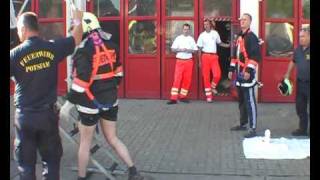 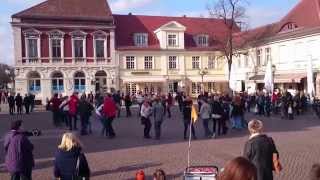 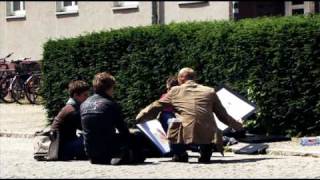 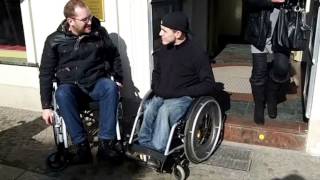 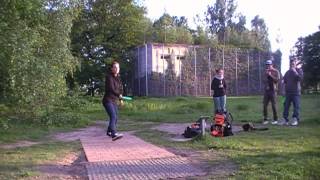 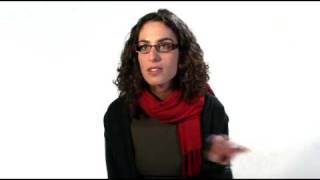 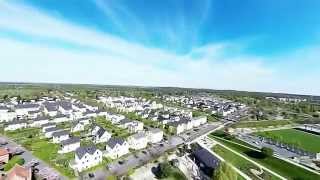 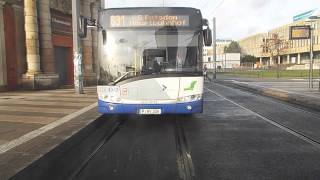 The complete journey on Route 91 from Bahnhof Pirschheide to Bahnhof Rehbrücke. 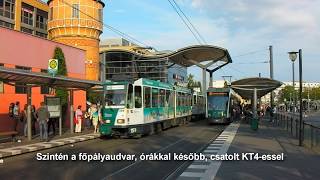 The Protestant Church of Peace is situated in the Marly Gardens on the Green Fence in the palace grounds of Sanssouci Park in Potsdam, Germany. The church was built according to the wishes and with the close involvement of the artistically gifted King Frederick William IV and designed by the court architect, Ludwig Persius. After Persius' death in 1845, the architect Friedrich August Stüler was charged with continuing his work.

The Neptune Grotto close to the Obelisk entrance in Sanssouci Park, Potsdam, was created by Frederick the Great between 1751 and 1757 to beautify the park. Built following plans by Georg Wenzeslaus von Knobelsdorff it arose as a representation of the revived interest in garden architecture. The grotto ought to have been a component of the numerous fountains of the park, which did not function at that time, owing to a lack of technical knowledge.

The Obelisk entrance constitutes the eastern limit of Sanssouci Park in Potsdam, Germany. Following plans by Georg Wenzeslaus von Knobelsdorff, Frederick the Great ordered in 1747 that this exit from the park be built. The New Palace, built at a later date, stands in the line of sight of the entrance; the two are connected by the roughly 2 km long main alley.

The New Chambers in Sanssouci Park, Potsdam, were constructed for King Frederick the Great of Prussia from 1771 to 1775.

The Picture Gallery in the park of Sanssouci palace in Potsdam was built in 1755–1764 during the reign of Frederick II of Prussia under the supervision of Johann Gottfried Büring. The Picture Gallery is situated east of the palace and is the oldest extant museum built for a ruler in Germany.

Located at 52.4039, 13.0411 (Lat. / Lng.), about 0 miles away.
Wikipedia Article
Buildings and structures in Potsdam, Art museums and galleries in Germany, Museums in Potsdam, Sanssouci Park

The Ruinenberg is a hill in the Bornstedt borough of Potsdam, located north of Sanssouci Park. In 1748, the Prussian king Frederick the Great had a water tank with a capacity of around 7600 m³ built on top to supply the Sanssouci water features, and had it decorated with artificial ruins. From 1841 a surrounding landscape garden was laid out at the behest of King Frederick William IV of Prussia, according to plans designed by Peter Joseph Lenné.

Sanssouci is the former summer palace of Frederick the Great, King of Prussia, in Potsdam, near Berlin. It is often counted among the German rivals of Versailles. While Sanssouci is in the more intimate Rococo style and is far smaller than its French Baroque counterpart, it too is notable for the numerous temples and follies in the park.

The Royal Country House in Potsdam is situated on mount Kapellenberg and was originally constructed for the sexton of the Russian Orthodox chapel of Saint Alexander Nevsky nearby. The façade of the log house recalls simple German and Russian farm constructions. It was actually used as a royal residence. On the second floor, King Frederik William III would give tea parties, sometimes gathering up to 40 persons. Interior furnishings of the royal rooms affected extreme simplicity.

The Brandenburg Gate on the Luisenplatz in Potsdam, not to be confused with the gate of the same name on Berlin's Pariser Platz, was built in 1770/71 by Carl von Gontard and Georg Christian Unger by order of Frederick II of Prussia. It stands at the western end of Brandenburger Straße, which runs in a straight line up to the Church of St.  Peter and St. Paul. Previously, from 1733, there was another, simpler gate on the same spot, which resembled a castle gateway.

Pfingstberg (Potsdam) is a hill in Brandenburg, Germany. The Belvedere auf dem Pfingstberg sits atop the hill.

Thanks to the legend of The Miller of Sanssouci (German: Der Müller von Sanssouci), the Historic Mill (Historische Mühle) became a famous well beyond the boundary of Potsdam in Germany and associated especially with Frederick the Great and his summer palace of Sanssouci.

The Green Gate in Potsdam is the main gateway into Sanssouci Park and is situated at the end of the avenue to Sanssouci Palace. This begins as one of three roads that radiate from the Luisenplatz square. The gate was designed by Ludwig Ferdinand Hesse and was put up in 1854 as part of the construction of the Church of Peace. Its name comes from the colour in which the gate was painted. Additional ornamentation is provided by individual bars and points being picked up in gold leaf.

These are some bigger and more relevant cities in the wider vivinity of Jägervorstadt.