Wiehre
District of Freiburg
in Freiburg Region of Baden-Württemberg, Germany

The district Wiehre of Freiburg in Freiburg Region (Baden-Württemberg) is located in Germany about 398 mi south-west of Berlin, the country's capital.

Depending on your travel schedule, you might want to pay a visit to some of the following locations: Merzhausen, Au, Horben, Wittnau and Gundelfingen. To further explore this place, just scroll down and browse the available info. 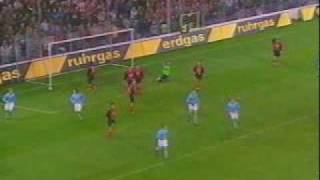 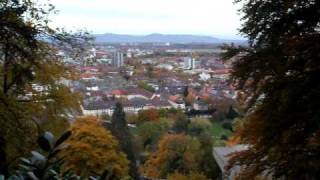 The Schlossbergturm or Castle Hill Tower is a 35 m high observation tower on Castle Hill Schlossberg on the edge of the historic Altstadt of Freiburg im Breisgau. It has 153 steps, its top is located 463 m above sea level and thus 185 m above the average altitude of the city (278 m). The tower which was built in 2002 stands out for its unusual design consisting of twisted tree trunks (Douglas-firs from the municipal forest of Freiburg) around a staircase made of steel.

Located at 47.995, 7.86194 (Lat. / Lng.), about 0 miles away.
Wikipedia Article
German architecture, Towers in Germany, Buildings and structures in Baden-Württemberg

Freiburg Minster (German: Freiburger Münster or Münster Unserer Lieben Frau) is the cathedral of Freiburg, southwest Germany. The last duke of Zähringen had started the building around 1200 in romanesque style, the construction continued in 1230 in Gothic style. The minster was partly built on the foundations of an original church that had been there from the beginning of Freiburg in 1120. In 1827 the Minster became the seat of the Catholic archbishop of Freiburg and thus a cathedral.

The Walter Eucken Institut is a German ordo-liberal economic think tank based in Freiburg im Breisgau, Baden-Württemberg, Germany. The Institute was founded in 1954, four years after the death of economist Walter Eucken, by a number of his friends and pupils. The Institute's creation was supported by Ludwig Erhard, then Secretary of Economic Affairs and later Chancellor of West Germany. Honorary Presidents have included Nobel laureates Friedrich Hayek and James M. Buchanan.

The Corps Suevia Freiburg is one of the oldest German Student Corps, a Studentenverbindung or student corporation founded by 13 students at the Albert Ludwigs University of Freiburg on June 21, 1815. As a member of the Freiburger Senioren Convent (SC) it is a founding member of the Kösener Senioren-Convents-Verband (KSCV), the oldest governing body of such student associations in both Germany and Austria.

Ganter is a private brewery based in Freiburg, Germany. It was founded in 1865 by Louis Ganter, and as of 2005 is run by Maximilian Erlmeier. The brewery was founded in a three-story renaissance building which had previously belonged to Erasmus of Rotterdam, and in 1854 had become the Ringwald Brewery. Ten years later, the brewery moved to its current site on the outskirts of the town.

Wiehre is a residential district at the edge of Freiburg im Breisgau, located southwards and across the River Dreisam from the Old City. It is a desirable district, with comparatively quiet streets, and many well-preserved commercial and residential buildings dating from the 18th century and earlier; rent is high, relative to the rest of the city.

The 29th Division (29. Division) was a unit of the Prussian/German Army, almost entirely made up of troops from the Grand Duchy of Baden. It was formed in Karlsruhe on July 1, 1871. The division was subordinated in peacetime to the XIV Army Corps (XIV. Armeekorps). The 29th Division was disbanded in 1919 during the demobilization of the German Army after World War I.

Located at 47.9978, 7.85306 (Lat. / Lng.), about 0 miles away.
Wikipedia Article
German divisions of World War I, Infantry divisions of Germany, Military units and formations established in 1871, Military units and formations disestablished in 1919, 1871 establishments in Germany, 1919 disestablishments in Germany

The Freiburg Institute for Advanced Studies (FRIAS) is the international research college of the University of Freiburg in Freiburg, Germany. The institute was initially part of the university's proposal for funding in the Excellence Initiative in 2007, an initiative by the German Federal Ministry of Education and Research and the German Research Foundation with the aim of promoting both cutting-edge research and enhancing the international success of German higher education institutions.

The Max Planck Institute for Foreign and International Criminal Law (German: Max-Planck-Institut für ausländisches und internationales Strafrecht) is a non-university research institute located in Freiburg, Germany. The institute is part of the Max Planck Society and is conducting basic research into criminal law and criminology. The Institute is currently headed by Hans-Jörg Albrecht (criminology) and Ulrich Sieber (criminal law).

University of Freiburg Faculty of Theology

The University of Freiburg Faculty of Theology is one of the constituent faculties of the University of Freiburg located in Freiburg, Baden-Württemberg in Germany. The Faculty of Theology was one of the four founding faculties of the university in 1457. A Roman-Catholic faculty, approximately 700 students are enrolled as candidates for priesthood, as graduate theologists for service in the church, or in order to achieve graduate teaching qualifications.

The Schlossberg (Fortified Castle) is a tree-covered hill of 456 metres located in the area of the city of Freiburg im Breisgau. It is directly to the east of Freiburg’s Old Town and belongs to the Black Forest. The main geological fault is at the western edge of the Schlossberg towards the Upper Rhine Graben.

The Arboretum Freiburg-Günterstal (about 100 hectares) is an arboretum maintained by the University of Freiburg. It is located in Günterstal in the Städtischen Forstamt Freiburg at Günterstalstraße 71, Freiburg, Baden-Württemberg, Germany, and open daily without charge. The arboretum dates back to 1896, or earlier, when its first Douglas fir plantations were created to investigate their uses in local forestry. These early plantings focused primarily on useful trees from North America and Japan.

Zum roten Bären is the oldest hotel in Germany. The foundations of the hotel predate the founding of the town of Freiburg by the dukes of the House of Zähringen in 1120. The first written documentation was in the land register document of the nearby monastery from the year 1311 listing the landlord as Hanmann Bienger the elder. Many of the landlords were also court and councilmen of the city of Freiburg and often also guild masters.

Located at 47.9933, 7.854 (Lat. / Lng.), about 0 miles away.
Wikipedia Article
Buildings and structures in Baden-Württemberg, Freiburg im Breisgau, Hotels in Germany, Companies established in the 14th century

The Kiepenheuer Institute for Solar Physics is a research institute located in Freiburg, Germany. Its research focuses on the exploration of the Sun and heliosphere. The institute has one solar telescope on the Schauinsland Mountain near Freiburg and, in collaboration with other institutions, uses solar telescopes of the Teide Observatory in Tenerife, Spain.

The Hochschule für Musik Freiburg (University of Music, Freiburg or Freiburg Conservatory of Music) is a public music academy subsidized by the State of Baden-Württemberg for academic research and artistic and pedagogical training in music.

The Augustiner Museum is a museum in Freiburg im Breisgau, Germany. It is undergoing an extensive renovation and expansion, the first phase of which ended in 2010.

The Muettersproch-Gsellschaft (short MSG, engl. society for the mother tongue) is a society established in 1967 whose goal it is to preserve and foster the Alemannic dialects. It currently has over 3,500 members from all Alemannic speaking areas, i.e. Elsass, Switzerland and Vorarlberg, but especially from South Baden. There are also members from all over Europe and the Americas. Most Alemannic authors, poets and singer-songwriters in South Baden are members of the society.

The Schlossbergbahn, or Castle Hill Railway, is a funicular railway in the town of Freiburg im Breisgau in Baden-Württemberg, Germany. It links the city centre with the Schlossberg hill. The funicular was constructed in 2008, in order to replace a previous cable car. It is operated by the Schlossbergbahn GmbH & Co. KG. It operates daily between 09:00 and 22:00 .

Harrys Depot is a theatre in Baden-Württemberg, Germany.

Wallgraben-Theater is a theatre in Baden-Württemberg, Germany.

The Fraunhofer Institute for High-Speed Dynamics, commonly known as the Ernst Mach Institute and also by the abbreviation Fraunhofer EMI, is a facility of the Fraunhofer Society in Germany. The Institute is based in Freiburg im Breisgau. Its activities are applied research and development in the fields of materials science and high-speed measurement techniques. The Institute also has offices in Efringen-Kirchen and Kandern.

Archaeology Colombischlössle Museum is an Archaeology Museum in Freiburg im Breisgau in southwest of Germany. Prehistory inheritance are featured in there. It was founded as the Museum of Prehistory and Early History since 1983. The focus of the museum is on the human development of the High and upper Rhine from the Paleolithic Age to the Early Middle Ages.

These districts also belong to Freiburg.

These are some bigger and more relevant cities in the wider vivinity of Freiburg.

This place is known by different names. Here the ones we know:
Wiehre