Since you are here already, you might want to pay a visit to some of the following locations: Giza, Banha, Shibin al Kawm, Zagazig and Tanda. To further explore this place, just scroll down and browse the available info. 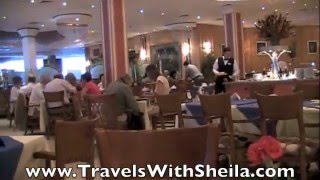 http://www.TravelsWithSheila.com Room prices in Cairo range from dirt cheap to super-shock and there must be hundreds to choose from. We picked the Movenpick Resort Cairo Pyramids for its... 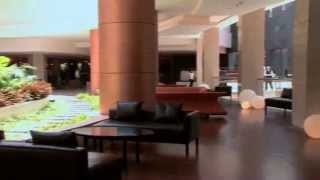 Find similar venues here: http://www.virtualvenuevisit.com/ At the heart of Cairo's diplomatic and presidential neighborhood, a few minutes away from Cairo International Airport stands the... 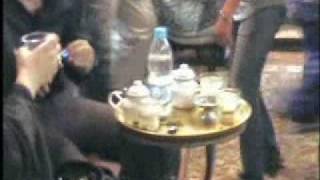 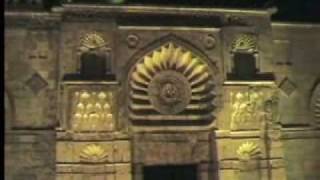 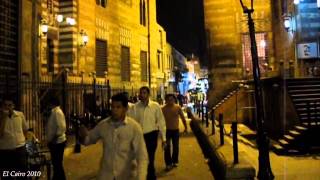 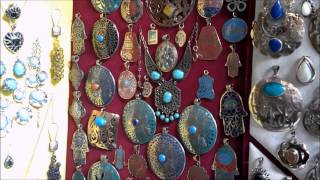 address shop : 6 khan EL-Khlili-cairo telephone: 25925526 The name of the seller in the shop Mohammed sheded email:onixforsilver@yahoo.com. 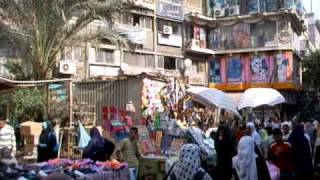 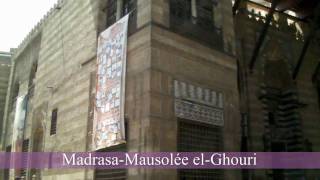 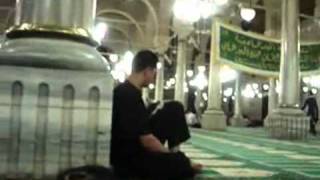 Al-Azhar University is a university in Cairo, Egypt. Founded in 970 or 972 as a madrasa, or centre of Islamic learning, its students studied the Qur'an and Islamic law in detail, along with logic, grammar, rhetoric, and how to calculate the lunar phases of the moon. By bringing together the study of a number of subjects in the same place it was one of the first universities in the world and the only one to survive as a modern university including secular subjects in the curriculum.

Bab Zuweila is a medieval gate in Cairo, which is still standing in modern times. It was also known as Bawabbat al-Mitwali during the Ottoman period, and is sometimes spelled Bab Zuwayla. It is considered one of the major landmarks of the city and is the last remaining southern gate from the walls of Fatimid Cairo in the 11th and 12th century.

Islamic Cairo is a part of central Cairo noted for its historically important mosques and other Islamic monuments. It is overlooked by the Cairo Citadel. Islamic Cairo, also referred to as Medieval Cairo or Fatimid Cairo, was founded in 969 as the royal enclosure for the Fatimid caliphs, while the actual economic and administrative capital was in nearby Fustat.

Abdeen Palace is a historic Cairo palace, and one of the official residences and the principal workplace of the President of Egypt, located above Qasr el-Nil Street in eastern Downtown Cairo, Egypt.

The Mosque of Al Salih Tala'i is one of about 43 historic monuments that were marked for restoration in the first phase of a project meant to turn the medieval part of Cairo into an open-air museum. the Mosque is considered a suspended Mosque, this means that the mosque is built above stores that rent the space, helping to financially support the mosque.

Al-Azhar Park is a public park located in Cairo, Egypt. Among several honors, this park is listed as one of the world's sixty great public spaces by the Project for Public Spaces. The park was created by the Historic Cities Support Programme of the Aga Khan Trust for Culture, an entity of the Aga Khan Development Network .

Khan el-Khalili is a major souk in the Islamic district of Cairo. The bazaar district is one of Cairo's main attractions for tourists and Egyptians alike.

Al-Hussein Mosque  ; alternative transliterations: Husayn, Hussain, Husayn, Hussayn; also prefixed by the honorific title Sayyidna is a mosque built in 1154 and located in Cairo, Egypt, near the Khan El-Khalili bazaar. It is named for the grandson of Muhammad, Husayn ibn Ali, whose head is believed by Fatimid Shia/Dawoodi Bohra to be buried on the grounds of the mosque. Many Shī‘ah Muslims believe that the head of Husayn ibn Ali is with his body in the Imam Husayn Mosque in Karbala.

The Aqsunqur Mosque (also known as the Blue Mosque or the Mosque of Ibrahim Agha) is located in Cairo, Egypt and is one of several "blue mosques" in the world. It is situated in the Tabbana Quarter in Islamic Cairo, between Bab Zuweila and the Citadel of Saladin (Cairo Citadel.

El-Sakakini is a small district (quarter) in Cairo, Egypt that neighbours the El Zaher and Abbaseya districts. Sakakini was originally part of El Zaher, but it was named after a wealthy, famous, family of Syrian origin, whose patriarch (head of the family), Count Gabriel Habib Sakakini Pasha (1841–1923) had built a palace and a church in the area in 1897.

Bayt Al-Suhaymi ("House of Suhaymi") is an old Ottoman era house museum in Cairo, Egypt. It was originally built in 1648 by Abdel Wahab el Tablawy along the Darb al-Asfar, a very prestigious and expensive part of Medieval Cairo. In 1796 it was purchased by Sheikh Ahmed as-Suhaymi whose family held it for several subsequent generations. The Sheikh greatly extended the house from its original through incorporating neighbouring houses into its structure.

Beshtak Palace is a palace and museum in Cairo, Egypt. It represents Arabic architecture in the medievial period in Egypt. It was built in 1334 by Amir Beshtak al-Nasiri. The palace is located on the Muizz Street, next to the Katkhuda Sabil. The museum inside documents the history of Cairo.

Sabil-Kuttab of Katkhuda is one of the most important monuments in the old part of Islamic Cairo, Egypt. This building is an example of Ottoman and Mamluk architecture mixed with Islamic architecture. It was built in 1744 by a pioneer Egyptian architect, Katkhuda of Egypt ('Abd al Rahman Katkhuda'). Some architects describe it as "The treasure of Ottoman architecture".

The Bayt al-Razzaz Palace was constructed from the late 15th century through the late 18th century in the heart of medieval Cairo, Egypt. Bayt al-Razzaz is an abandoned 178-room urban palace in the Darb al-Ahmar neighborhood of medieval Cairo. It is a property of the Egyptian Supreme Council of Antiquities. It was built in the time of the Mamluk sultan Qayt Bay or Qaitbay.

Located at 30.0375, 31.2592 (Lat. / Lng.), about 2 miles away.
Wikipedia Article
Palaces in Egypt, Arabic architecture, Buildings and structures in Cairo, Houses completed in the 18th century

Al-Muizz st. (Shariʻa al-Muizz li-Deen Illah) (30°02′ 48" N 31°15′ 36"E) in Islamic Cairo, Egypt is one of the oldest streets in Cairo, approximately one kilometer long. A United Nations study found it to have the greatest concentration of medieval architectural treasures in the Islamic world. The street (shariʻa in Arabic) is named for Al-Muʿizz li-Deen Illah, the fourth caliph of the Fatimid dynasty. It stretches from Bab Al-Futuh in the north to Bab Zuweila in the south.

The Qalawun complex is a massive complex in Cairo, Egypt that includes a madrasa, a hospital and a mausoleum. It was built by the Sultan Al-Nasir Muhammad Ibn Qalawun in the 1280s; some thirty surviving mosques were built during his time.

The Mosque of Sultan al-Mu'ayyad is a Mosque in Cairo, Egypt next to Bab Zuwayla built by the Mamluk sultan Al-Mu'ayyad Sayf ad-Din Shaykh from whom it takes its name. Construction began in 1415 and the mosque was completed in 1421. The complex included a Friday mosque and a madrasa for four madhhabs. It replaced a prison which originally stood next to Bab Zuwayla.

The 2009 Khan el-Khalili bombing was a bomb explosion that took place at 6:30 p.m. local time on 22 February 2009 in Khan el-Khalili, a souq in eastern Cairo, Egypt, killing a 17 year old French teenager and injuring 24 other people. It was the first of the February 2009 Cairo terrorist attacks.

Al-Jam`e Al-ِAqmar or Al-Aqmar Mosque, also called Gray mosque, is a mosque in Cairo, Egypt dating from the Fatimid era. It was built in the under vizier al-Ma'mun al-Bata'ihi during the caliphate of Imam Al-Amir bi-Ahkami l-Lah. The mosque is located on north Muizz Street.

The Amir Taz Palace is a palace in Cairo, Egypt. It is situated on the intersection of Saliba Street and Suyufiyya Street, and forms the main entrance to Medieval Cairo. The palace was originally built in 1352 by a Mamluk belonging to one of Sultan Qalawun's sons. The palace of Emir Taz was subsequently remodelled several times, most notably in the 17th century, during the reform of the Khedive Ismail.

The Maimonides Synagogue, also known as the Rav Moshe Synagogue, is a historic synagogue located in Cairo, Egypt. A synagogue has existed at the site since the 10th century and was subsequently named after the famous Jewish philosopher, rabbi and physician Maimonides, after his arrival there in around 1168. It is believed that Maimonides' original tomb is contained within the building.

Ibn Maïmoun Synagogue is a synagogue in Cairo, Egypt.

The Sultan Al-Ghuri Complex was built between the years 1503 and 1505. This huge complex consists of a Khanqah, Mausoleum, Sabil-Kuttab, Mosque and Madrasa and is located at the Fahhamin Quarter, al Mu'izz li-Din Allah street in Cairo, Egypt. The structure lies on both sides of the al Mu'izz li-Din Allah street, with the congregational Mosque-Madrasa built on the western side, and the Khanqah-mausoleum-sabil-kuttab on the eastern side.

Alhaud Almarsoud,Cairo Dermatology Hospital ... AlHaud AlMarsoud is a name given to a hospital in Cairo, Egypt. The hospital provides services in Dermatology, Venereology, Sexual and Reproductive health.

Amir Alin Aq Palace (also known as Amir Khayrbak Palace, Emir Khayrbak Palace, or Amir Khayr Bek Palace) was built in 1293. It stands on the Darb al-Ahmar, the ceremonial road leading to the Citadel in Cairo. Its reception hall (qa'a) is particularly notable. Alin Aq was an amir and cupbearer to Sultan al-Ashraf Khalil ibn Qalawun. This building is early Bahri and is now in ruins, with the exception of the portal.