Local time in Aswan is now 07:04 AM (Tuesday). The local timezone is named Africa / Cairo with an UTC offset of 2 hours. We know of 7 airports in the vicinity of Aswan. The closest airport in Egypt is Aswan International Airport in a distance of 10 mi (or 16 km), South-West. Besides the airports, there are other travel options available (check left side).

There is one Unesco world heritage site nearby. It's Ancient Thebes with its Necropolis in a distance of 115 mi (or 185 km), North. Looking for a place to stay? we compiled a list of available hotels close to the map centre further down the page.

When in this area, you might want to pay a visit to some of the following locations: Luxor, Qina, Al Kharijah, Sohag and Hurghada. To further explore this place, just scroll down and browse the available info. 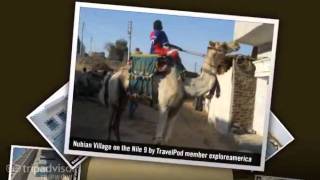 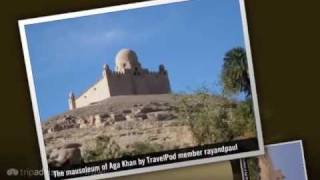 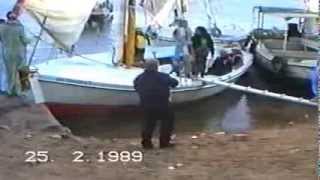 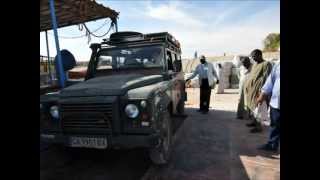 How the cars are loaded on the ferry form Aswan to Wadi Halfa. 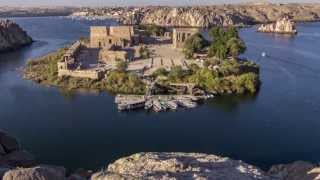 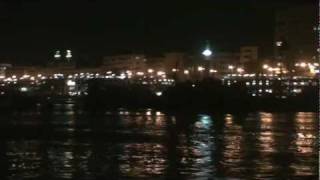 Night Time on the Nile River at Aswan أسوان‎ - Egypt

Boating into Aswan after dark along the Nile River in Egypt. Boating,Lystbåd,Sportschifffahrt,قایق‌رانی,Plaisance,navigation de plaisance,Pleziervaart,Veneily,Fritidsbåt Aswan,أسو... 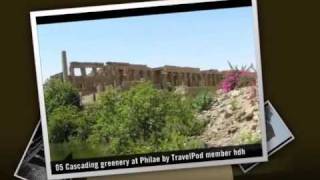 The land the desert drowned Hdh's photos around Aswan, Egypt (property covered up by aswan dam)

Preview of Hdh's blog at TravelPod. Read the full blog here: http://www.travelpod.com/travel-blog-entries/hdh/rtw/1147883640/tpod.html This blog preview was made by TravelPod using the TripAdvis... 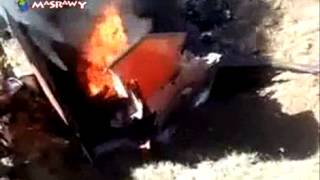 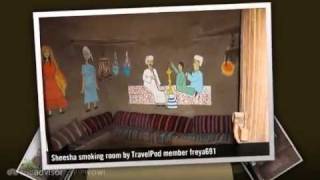 Preview of Freya691's blog at TravelPod. Read the full blog here: http://www.travelpod.com/travel-blog-entries/freya691/4/1254413000/tpod.html This blog preview was made by TravelPod using... 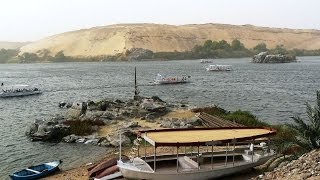 Sir Sultan Muhammed Shah, Aga Khan III, GCSI, GCMG, GCIE, GCVO, PC (2 November 1877 – 11 July 1957) was the 48th Imam of the Nizari Ismaili community. He was one of the founders and the first president of the All-India Muslim League. His goal was the advancement of Muslim agendas and protection of Muslim rights in India. The League until the late 1930s was not a mass organisation but represented the landed and commercial Muslim interests of the United Provinces.

Elephantine is an island in the Nile River in northern Nubia. It is a part of the modern city of Aswan, in southern Egypt. There are archaeological sites on the island.

Kitchener's Island (locally known in Arabic as Geziret an-Nabatat, جزيرة النباتات - translated as "island of plants"), is a small, oval-shaped island in the Nile at Aswan, Egypt. The Aswan Botanical Garden is located on the entire island.

Cataracts of the Nile

The cataracts of the Nile are shallow lengths of the Nile River, between Aswan and Khartoum, where the surface of the water is broken by many small boulders and stones protruding out of the river bed, as well as many rocky islets. In some places, these stretches are punctuated by whitewater and are perhaps well characterized as rapids, while at others the water flow is smoother, but still shallow.

The unfinished obelisk is the largest known ancient obelisk and is located in the northern region of the stone quarries of ancient Egypt in Aswan (Assuan), Egypt. Archaeologists claim the pharaoh known as Hatshepsut sanctioned its construction. It is nearly one third larger than any ancient Egyptian obelisk ever erected. If finished it would have measured around 42 m (approximately 137 feet) and would have weighed nearly 1,200 tons (1,066,621 kilograms).

Aswan Museum is a museum on Elephantine Island, in the south-eastern side of Aswan, Egypt. It opened to the public in 1912 and features Nubian artefacts saved during the construction of the Aswan Dam. In 1990 a new extension was added displaying findings discovered on Elephantine Island itself, like utensils, weapons, pottery and mummies. The museum is close to the Ruins of Abu, where excavations are still taking place.

El-Tabia Mosque is a mosque in Aswan, Egypt. The mosque is surrounded by scenic gardens. The El-Tabia Mosque is located amidst a park on a hill in the center of Aswan. It reveals a typical architecture of central-dome mosques having an arched entrance, flanked in this case by two minarets, and the prayer hall beneath a central dome.

Aswan Stadium is a stadium in Aswan, Egypt. It has a capacity of 20,000 spectators. It is the home of Aswan SC.

These are some bigger and more relevant cities in the wider vivinity of Aswan.