The district Komín of Brno in Město Brno (South Moravian) is a district in Czechia about 113 mi south-east of Prague, the country's capital city.

When in this area, you might want to pay a visit to some of the following locations: Velka Bites, Ottenthal, Drasenhofen, Neudorf bei Staatz and Falkenstein. To further explore this place, just scroll down and browse the available info. 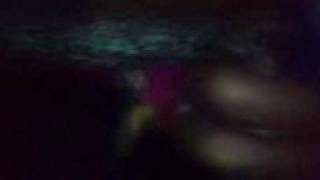 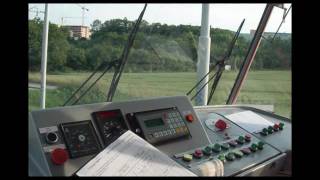 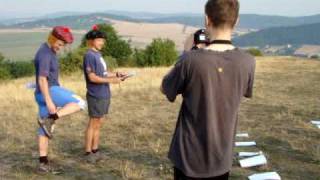 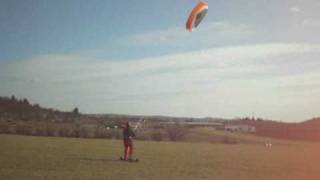 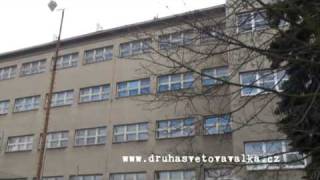 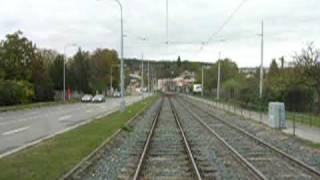 Tram enthusiast amateur clip filmed in October 2009. Brno is the second largest city in Czech Republic, Central Europe. It is something like second capital for Moravia region. City has 370... 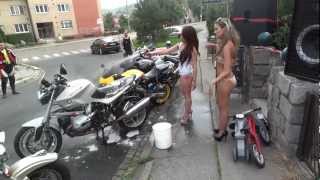 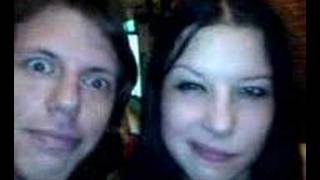 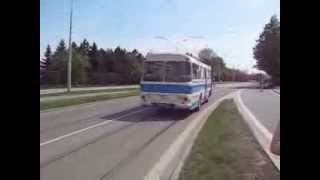 How to make: best coffee ever

This is our video in the English course on the subject How to make the best coffee ever.

Masaryk University is the second largest university in the Czech Republic, a member of the Compostela Group and the Utrecht Network. Founded in 1919 in Brno as the third Czech university, it now consists of nine faculties and 42,182 students. It is named after Tomáš Garrigue Masaryk, the first president of an independent Czechoslovakia as well as the leader of the movement for a third Czech university.

Brno University of Technology is a university located in Brno, Czech Republic. Being founded in 1899 and initially offering a single course in civil engineering, it grew to become a major Czech university with over 24,000 students enrolled at 8 faculties and 2 university institutes.

The Stadion Za Lužánkami is a currently inactive stadium in Brno, Czech Republic. It was primarily used for football, and was the home ground of FC Zbrojovka Brno. It held 50,000 people. The stadium was constructed 1949-1953 and in the 1960s-1970s was the biggest stadium in Czechoslovakia. Za Lužánkami holds the record for the highest attendance in the Gambrinus liga, set in a match in the 1996–97 Gambrinus liga between Brno and Slavia Prague. It was closed in 2001 after 1.

Městský fotbalový stadion Srbská is a multi-purpose stadium in Brno, Czech Republic. It is currently used mostly for football matches and is the home ground of FC Zbrojovka Brno. The stadium holds 12,550 people and was built in 1926. The club moved into the stadium in 2001, having previously played at Stadion Za Lužánkami.

Královo Pole indoor arena was an indoor sporting arena located in Brno, Czech Republic. The capacity of the arena was 10,200 people. It opened in 1947 and closed in 1998. There was a village called KÖNIGSFELD - KRALOVO POLE near Brno. A post-office was opened 30 November 1868. References

Located at 49.2108, 16.609 (Lat. / Lng.), about 1 miles away.
Wikipedia Article
Indoor ice hockey venues in the Czech Republic, Buildings and structures in Brno, Sport in Brno

Bystrc is a district of the city of Brno in the Czech Republic. Former village on the banks of the Svratka river. The Brno Zoo and Brno reservoir are located there. Called also Bastr in local slang dialect Hantec.

The Orel movement is a Moravia-based Czech youth movement and gymnastics organization which emerged between 1902-1909 as Catholic Church-supported competitor of the nationalistic and therefore, in the local policical context, rather anti-Catholic organization Sokol. A similar organization with the same name was organized also in the Slovene Lands and in Croatia, where it successfully competed with the local Sokol movement.

St Thomas's Abbey is a church located in Brno in the Czech Republic. The geneticist and Abbot Gregor Mendel was its most famous religious leader to date, who between 1856 and 1863 conducted his experiments on pea plants in the monastery garden. His experiments brought forth two generalizations which later became known as Mendel's Laws of Inheritance.

Constitutional Court of the Czech Republic

The Moravian Gallery in Brno (Czech: Moravská galerie v Brně) is the second largest art museum in the Czech Republic, established in 1961 by merging of two older institutions. It is situated in three main buildings: Pražák Palace, Governor's Palace and Museum of Decorative Arts. Since 1963 the gallery has organized the International Biennale of Graphic Design (Mezinárodní bienále grafického designu).

Kajot Arena, formerly known as Starobrno Rondo Aréna and Hala Rondo, is an indoor arena in Brno, Czech Republic. The capacity of the arena is 7,200 people and it was built in 1982. It is currently home to the HC Kometa Brno ice hockey team. Until 2011, the arena was named Hala Rondo. However, after Kajotbet started sponsoring the arena, it was renamed Kajot Arena.

Bohunice is a district of the second largest city in the Czech Republic - Brno. It is located in the southwest part of the city. It is first mentioned in 1237. It began growing rapidly at the beginning of the 18th century. In 1919, Bohunice officially became part of Brno, which meant further growth. Street names first appeared in 1925. In 1921, Bohunice had 202 houses and 1463 inhabitants. Today's statistics show that Bohunice currently have approximately 540 houses with 17 300 inhabitants.

Thanks to its geographic location between the capitals of Prague, Bratislava, Vienna, and the Katowice region in the south of Poland, as well as the infrastructure and size of the fairgrounds, and backed by the Czech industrial base and tradition in manufacturing, the Brno Exhibition Center has emerged as a leading venue for international conventions, trade shows and special events in Central Europe.

Located at 49.1875, 16.5781 (Lat. / Lng.), about 1 miles away.
Wikipedia Article, Homepage
Buildings and structures in Brno, Convention centers in the Czech Republic, Visitor attractions in Brno

Semilasso is the nom-de-plume adopted by Prince Hermann von Pückler-Muskau (1785–1871), a famous German traveller and landscape gardener, for his autobiographical travel books. It is also the name of a Cultural Centre in the Královo pole district of Brno, Czech Republic, which takes its name from the former public house "U semilassa", once known as the "Schaffgotschův hostinec", which was renamed about 1836 in tribute to Pückler-Muskau.

Sportovní hala Vodova is an indoor sporting arena located in Brno, Czech Republic. The capacity of the arena is 3,000 spectators and hosted some matches from the 2010 FIBA World Championship for Women. It hosts indoor sporting events such as basketball, volleyball, and boxing. An old hall is built next to this hall with a capacity of 1,000.

TESCAN, a.s. is a Czech Republic company founded in 1991 by several R&D and service engineers from a former and now non-existing company, Tesla Brno. Its headquarters is located in Brno, Czech Republic, moreover Brno is considered as traditional city where electron microscopy was and now still is located. TESCAN's line of products is mainly focused on scanning electron microscopes from a wide range of thermal emission systems, LaB6 systems, and field emission systems to dual beam systems.

The Church of St. James (Czech: Kostel svatého Jakuba) in Brno, Czech Republic is a historic church. The history of the church dates back to the 13th century. In 1995 it was designated National Cultural Landmark. There is a tomb of Louis Raduit de Souches, defensor of Brno from 1645, in the church.

Located at 49.2044, 16.61 (Lat. / Lng.), about 1 miles away.
Wikipedia Article, Homepage
Education in Brno, Music schools in the Czech Republic, Educational institutions established in 1919, Buildings and structures in Brno

Mendel Museum has been an institution of Masaryk University in Brno, Czech Republic, since 2007. The museum was established in 2002 with the international co-operation of a number of organizations. The principal role in the creation of the museum itself was played by the Austrian society VFG and affiliated scientists and patrons. This workplace is located within the precincts of the Augustinian abbey in Old Brno, where the abbot and scientist Gregor Johann Mendel had worked.

Brno Ossuary is an underground ossuary in Brno, Czech Republic. It was rediscovered in 2001 in the historical centre of the city, partially under the Church of St. James. It is estimated that the ossuary holds the remains of over 50 thousand people which makes it the second-largest ossuary in Europe, after the Catacombs of Paris. The ossuary was founded in the 17th century, and was expanded in the 18th century. It's been opened to public since June 2012.

Located at 49.1967, 16.6084 (Lat. / Lng.), about 0 miles away.
Wikipedia Article
Buildings and structures in Brno, Visitor attractions in Brno, Ossuaries, Cemeteries in the Czech Republic

Located at 49.2173, 16.5959 (Lat. / Lng.), about 2 miles away.
Wikipedia Article
Universities in the Czech Republic, Educational institutions established in 1918, Education in Brno, Buildings and structures in Brno

Brno City Theatre is a repertoire theatre in Brno, Czech Republic, that focuses on dramatic and music production, mainly musical theatre. The building of the theatre is located on Lidická street in town square Brno-center. It has two acting areas – dramatical scene (capacity 365 places) and musical theatre scene (capacity 680 places). As of 2011, the manager and director of the theatre is Stanislav Moša, art manager of the musical ensemble is Petr Gazdík and operetta manager is Igor Ondříček.

Anthropos (or Anthropos Pavilion, from the Greek Άνθρωπος, human or man) is a museum located in the city of Brno, South Moravia, Czech Republic. The museum is a part of the Moravské zemské muzeum (Moravian Museum). It focuses on exhibitions presenting the oldest history of Europe and mankind. In a 2009 exhibition, the museum presented the most important art works of the Paleolithic era, such as Venus of Willendorf (exhibited for the first time outside of Austria) and Venus of Dolní Věstonice.

These districts also belong to Brno.

These are some bigger and more relevant cities in the wider vivinity of Brno.

BIOMASS - Trade Fair For Renewable Sources Of Energy In Agriculture And Forestry
Starting at: 02:00 am (02:00).
More Information: eventful.com.

BIOMASS - Trade Fair For Renewable Sources Of Energy In Agriculture And Forestry
Starting at: 02:00 am (02:00).
More Information: eventful.com.