Pointe-Gatineau
in Outaouais of Québec, Canada

Pointe-Gatineau in Outaouais (Québec) is a city in Canada a little north of Ottawa, the country's capital.

Local time in Pointe-Gatineau is now 04:51 AM (Wednesday). The local timezone is named America / Toronto with an UTC offset of -4 hours. We know of 8 airports in the vicinity of Pointe-Gatineau, of which 4 are larger airports. The closest airport in Canada is Ottawa / Rockcliffe Seaplane Base in a distance of 3 mi (or 4 km), East. Besides the airports, there are other travel options available (check left side).

There is one Unesco world heritage site nearby. It's Rideau Canal in a distance of 78 mi (or 126 km), South-East. Also, if you like golfing, there are multiple options in driving distance. If you need a place to sleep, we compiled a list of available hotels close to the map centre further down the page. 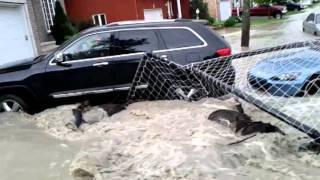 24 Sussex Drive is the official residence of the Prime Minister of Canada, located in the New Edinburgh neighbourhood of Ottawa, Ontario. Built between 1866 and 1868 by Joseph Merrill Currier, it has been the official home of the Canadian prime minister since 1951.

The South African High Commission in Ottawa is the high commission of South Africa in Ottawa, Canada. It is located at 15 Sussex Drive in the New Edinburgh neighbourhood of Ottawa. Directly across the street from the embassy is 24 Sussex Drive the official residence of the Prime Minister of Canada. East of the high commission is 7 Rideau Gate, Canada's official guest house for visiting dignitaries.

These are some bigger and more relevant cities in the wider vivinity of Pointe-Gatineau.