Pescaria Gastão in Luanda Province is a town in Angola about 35 mi (or 57 km) south of Luanda, the country's capital city.

Current time in Pescaria Gastão is now 02:38 PM (Friday). The local timezone is named Africa / Luanda with an UTC offset of one hour. We know of 8 airports near Pescaria Gastão. The closest airport in Angola is Quatro De Fevereiro Airport in a distance of 34 mi (or 54 km), North. Besides the airports, there are other travel options available (check left side).

When in this area, you might want to pay a visit to some of the following locations: Luanda, Caxito, N'dalatando, Sumbe and Uige. To further explore this place, just scroll down and browse the available info. 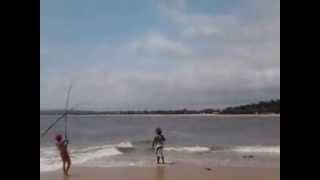 The Cuanza River (also spelled Coanza, Kwanzaa, Quanza, Kwanza, or Kuanza) is a river in Angola. It empties into the Atlantic Ocean just south of the nation's capital, Luanda. Rich biodiversity has been found in the Angolan river, according to research reported on the Science and Development Network website. Angola's first biodiversity tally of the Kwanza River has so far found 50 fish species.

These are some bigger and more relevant cities in the wider vivinity of Pescaria Gastão.